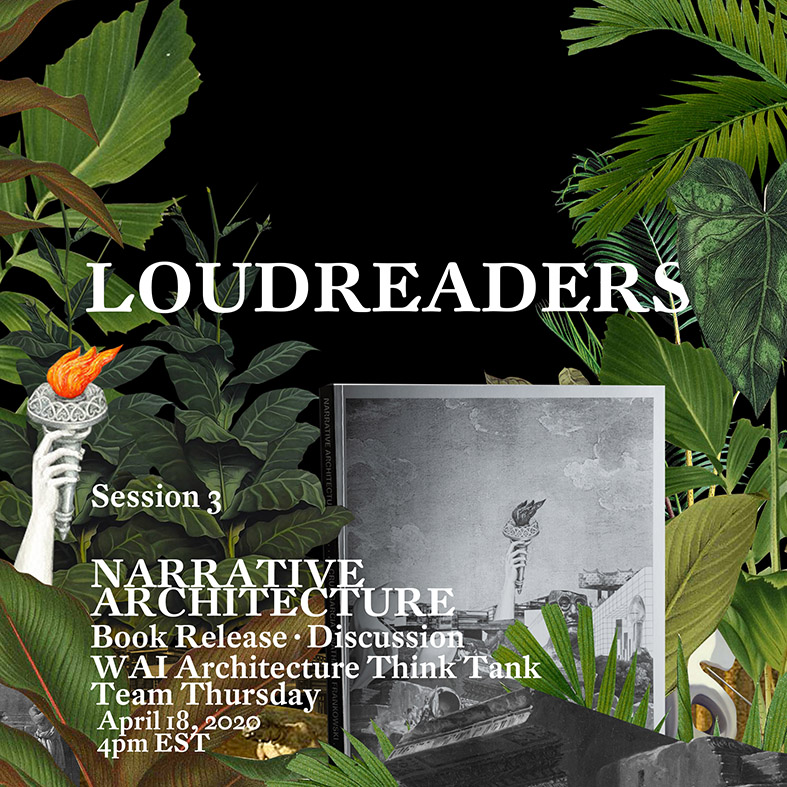 As all presentations and book lauches are now cancelled, WAI Architecture Think Tank (authors of Narrative Architecture: A Kynical Manifesto) came up with the great initiative to start LOUDREADERS. LOUDREADERS is a cross between podcast, YouTube channel, Zoom meeting, lecture series, digital curatorial program, and online workshop that establishes networks of solidarity around the world while discussing urgent positions, discourses, and media about architecture, urbanism, art, and culture.

The third session of LOUDREADERS welcomes you to join WAI Architecture Think Tank and Team Thursday as they present and discuss the contents, concepts, process, strategies, ideas, and design of the recently published Narrative Architecture: A Kynical Manifesto. As the world remains in unprecedented suspense, the authors and designers reflect on a book devised as an allegorical lantern to shed light on an honest architecture able to respond to the pressing challenges of our times.

The discussion will take place via meeting format Zoom and will be livestreamed on Facebook live.

More info on the programme here.

WAI Architecture Think Tank is a studio practice architecture from a panoramic approach co-founded by Cruz Garcia and Nathalie Frankowski. Garcia and Frankowski are the current Ann Kalla Professors at Carnegie Mellon University and the former Hyde Chairs of Excellence in Architecture at the University of Nebraska-Lincoln, and Visiting Teaching Fellows at The School of Architecture at Taliesin Previous publications include Pure Hardcore Icons: A Manifesto on Pure Form in Architecture (London: Artifice Books on Architecture, 2013), Shapes, Islands, Text: A Garcia Frankowski Manifesto (Sevilla: Vibok Works, 2014), and the independent zine What About It?

Team Thursday are the graphic designers of Narrative Architecture: A Kynical Manifesto

Team Thursday is a graphic design studio founded by Loes van Esch and Simone Trum, collaborating as a duo since 2010. Team Thursday focuses on the design of visual identities and books varying in scale and complexity. Team Thursday irregularly hosts exhibitions and events in the front part of their studiospace, TTHQ.

In addition to their daily practice they teach Typography at ArtEZ Arnhem, give workshops and lectures in various international institutions like OTIS Los Angeles, University of Seoul and HKU Utrecht.

inter·punct is a platform for ideas, theory, and discourse - sometimes about architecture and sometimes at its periphery. The group was founded by students at Carnegie Mellon University in 2011. As a collective we have no set agenda and go wherever our interests take us - from broadsheets to books to installations to lectures.

While the unprecedented pandemic linked to the global spread of COVID-19 presents the imminent cancellation and postponement of lectures, exhibitions, and presentations, and the daunting prospect of alienating labor, the upcoming months also provide with a unique opportunity to establish networks of intellectual solidarity and alternative forms of critical pedagogy.

LOUDREADERS is a cross between podcast, YouTube channel, Zoom meeting, lecture series, digital curatorial program, and online workshop that establishes networks of solidarity around the world while discussing urgent positions, discourses, and media about architecture, urbanism, art, and culture.

LOUDREADERS borrows its name from an alternative practice of education in the 20th Century created as tobacco workers engaged in the boring labor of rolling cigars hired one of their own who knew how to read, to read for them during the entire work-day. As the practice of loud-reading grew, the lectores (loud-readers) will become traveling performers with an international audience, creating networks of solidarity all around the Caribbean as well as a massive, shared and open access oral library to workers who were denied any other form of formal education. The books that these lectores read for the workers were mostly books of philosophy or literature that shared an emancipatory imagination.

As part of the program each guest becomes a Loudreader while selecting a book or a series of publications as a point of departure to engage with an online community.

In search of ways to render emancipatory imaginations LOUDREADERS creates an accessible library of oral and visual presentations established through collaborations with students, practitioners, educators, authors, thinkers, and members of the international community.