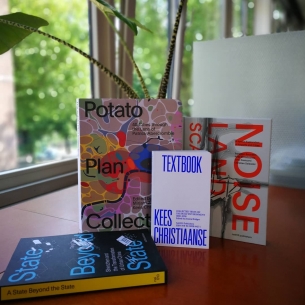 Just arrived at the office! TEXTBOOK by Kees Christiaanse. As one of the field’s most influential forces in urban design over the last half-century, we are proud to have published four of his books.

Textbook spans 30 years of the well-known urban designer and architect Kees Christiaanse’s thinking about cities. The collected texts range from charting the influence of the bicycle on his thinking about future mobility to the examination of dominant concepts and projects in the contemporary built environment. Illustrations of Christiaanse’s sketches, personal notebook pages and watercolours complement this unique collection.

With The Noise Landscape, a Spatial Exploration of Landscapes and Cities a research of several years by the chair of Kees Christiaanse at the ETH Zurich is published. The expansive areas around large airports, affected by noise, infrastructure, and transient forms of architecture, have until now not been researched as a phenomenon. But these noise landscapes are emerging worldwide, often surpassing the neighbouring city in size, and sometimes rivalling it in economic importance. On the basis of eight European case studies (Amsterdam, Zurich, London-Heathrow, Frankfurt, Munich, Madrid and the two Paris airports) this book provides the first account of how these landscapes emerged as the result of technical determinations, what is taking place in them, and how they can be interpreted.

A State Beyond a State by Ting Chen is the first comprehensive interpretation of Chinese urban transformation through the lens of state-owned enterprises. Supported by numerous interviews and primary data, this book points out the threats posed by typical large-scale projects of single SOEs (Stateowned enterprises), and further shows alternative development potentials that match the long-term socioeconomic demand, by learning from self-evolving SOE areas shaped by the combined forces of various public and private stakeholders. With an introduction by Kees Christiaanse.

Read Kees Christiaanse and order them all with discount until June 14. Use the discount code: Kees at the check out.